The thief messed with the wrong crowd when he tried to steal Mikaela Kellner and her friends' stuff. 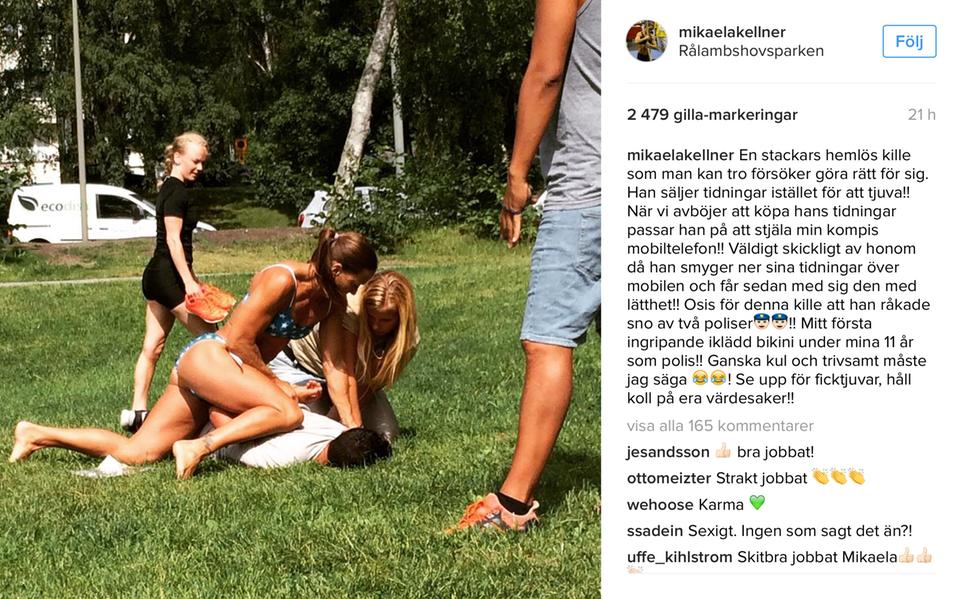 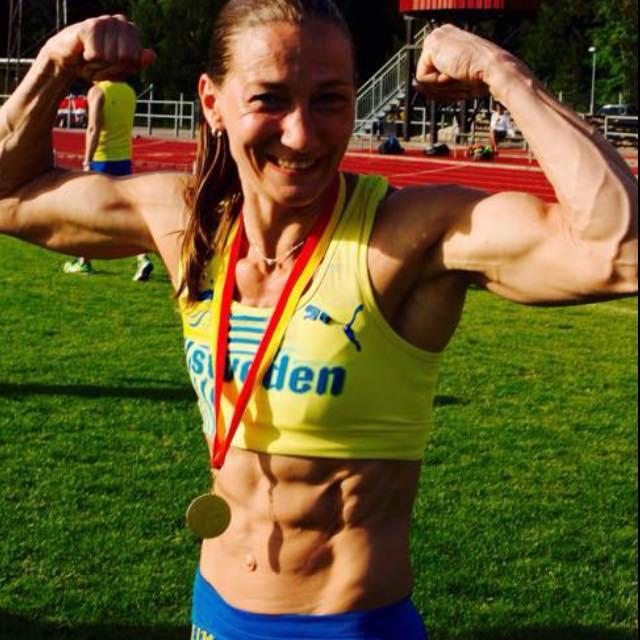 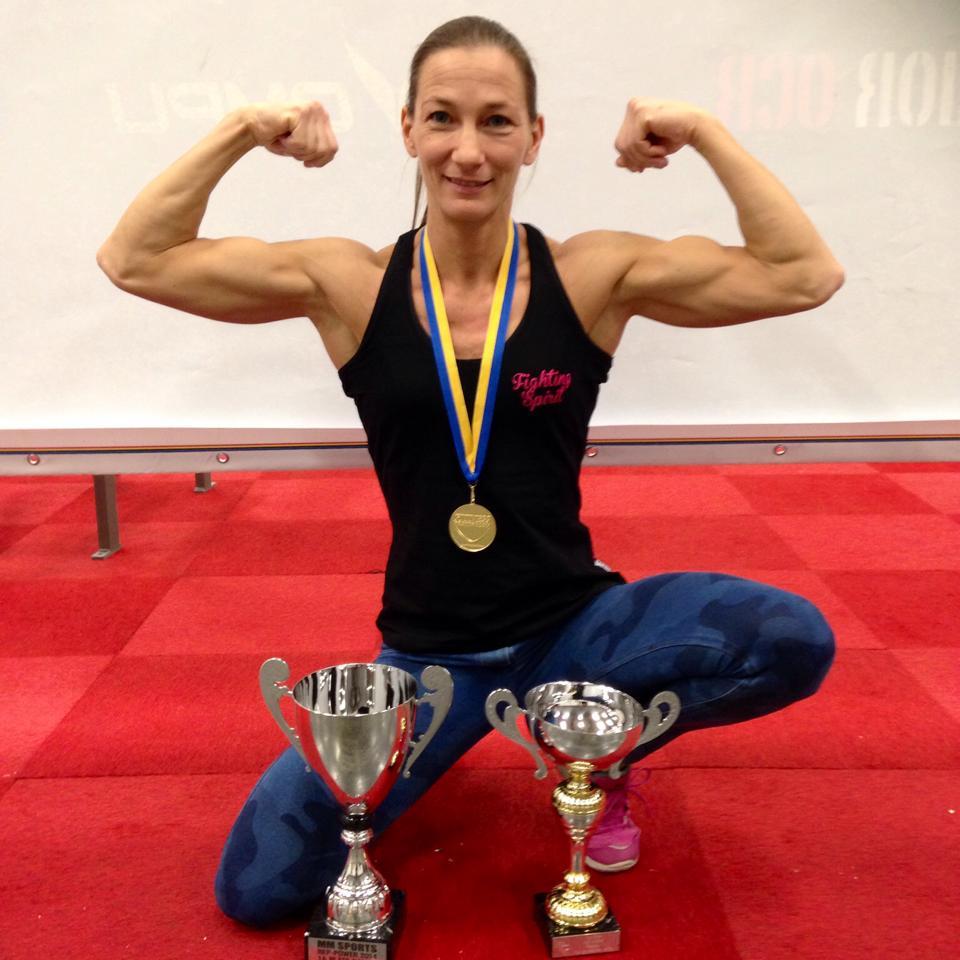 SverigeA thief that pretended to sell newspapers tried to steal from Mikaela Kellner and her friends in a park in Stockholm. What the villain did not know was that he tried to fool a bunch of cops.
Cecilia Vaccari
Stockholm Uppdaterad för 5 år sedan 18:23 - 28 jul, 2016

Mikaela Kellner and three friends were sunbathing and having a picnic in Rålambshovsparken in Stockholm on Wednesday when a guy came up, trying to sell magazines. The group declined in a friendly way to the offer.

– But he didn't give up, which they usually do. That was probably the first warning signal. Then I noticed that he was looking around, sort of screening our stuff, as he continued to try to persuade us. "Keep an eye on your things, he is looking for valuables to steal," I said to my friends, says Mikaela Kellner.

The group quickly tried to check where they had their valuables while the salesman continued his persistent attempts to sell magazines. One of her friends put her hand on her purse, but did not think of the fact that she had two phones. One of them was not in her hand bag since she was waiting for a call.

– He continued to hang around and walked around us a number of times. Finally, he put the magazines on the ground to show us what he had to offer.

After that he gave up. Just a few seconds after he left the party, one of her friends cried out.

– "My cell phone", exclaimed the girl with the two phones. So I went after him, Mikaela recounts.

The suspected thief had only gotten 10-15 meters away from the group when Mikaela stopped him. One of her friends, Malin, also tagged along.

She is not just anybody who just took down a thief, she's also a police, a dietist and a crossfit athlete. Since she was in the park sunbathing, she happened to be wearing a bikini when she wrestled down the thief. On Instagram, she wrote "This was my first arrest wearing a bikini, during my 11 years as a police !!"

– It was a little funny that I was wearing a bikini. But I would have done it even if I would have been naked ... Not that I tend to be naked in public spaces ... Mikaela ponders and laughs.

"A dream to arrest somebody committing a crime"

She actually feels sorry for the thief and thinks that the whole incident is tragic. She believes that it is not the villain's fault that there is so much theft.

– He is poor and probably reacts by stealing as a survival instinct. I don't blame him. But I must admit that it's a bit of a dream come true to arrest somebody in the act. So no matter what I was wearing, I would have done it, says Mikaela.

Why is it a dream to arrest somebody in the act?

– The plaintiff is usually someone else and when the police arrives, it's usually too late. Even if we catch the thief, he or she may have hidden the stolen goods. But if you arrest someone in the act, it is a clear case. It's a dream for a police officer!

Tips from the coach

Mikaela Kellner argues that the thief pulled a classic technique on them. It was obvious that he had done it many times before.

– It was like magic. He kneeled down to show us the magazines and snuck the phone in between them. It was both clever and efficient. We didn't even notice it and would have missed it completely, if it wasn't for Malin noticing that her phone was gone.

Mikaela knows but was brutally reminded by the incident that you must keep an eye on your valuables. This is especially true when the suspected thieves work in pairs.

– One diverts the attention and the other one snatches the stuff. Unfortunately, you can't trust people. You have to keep track of your things so you don't lose your mobiles and wallets. Especially when unknown people come up for a chat, says Mikaela.

Would you recommend others to make civil arrests?

– Both yes and no! If you're afraid, don't do it. But often thieves give up, most thieves are not violent people. But the best thing is to follow the thief, call the police and keep track of him or her until the police arrive. That's great!

Mikaela's received widespread reactions on her arrest. Both from people that she knows and from strangers.

– I've received a lot of messages from people that have experienced the same thing in the same place. It's something that happens all the time, specially in the summer. Thieves steal your wallet, your keys and cell phone.

If you are a foreign tourist in Sweden and get subjected to or witness an ongoing crime, please dial 112. For non-emergency matters call 114 14 or visit the nearest police station. If you are calling from a foreign cell phone dial +46 77 114 14 00. In an emergency, 112 works on foreign phones as well.

"No positive effect in building the story "

The annual Stockholm Pride Parade started at 1 pm Saturday and was celebrated peacefully until 4 pm. Suddenly a group of 10-15 men interrupted the Parade and a brief fight broke out before the Police arrived.
Läs mer