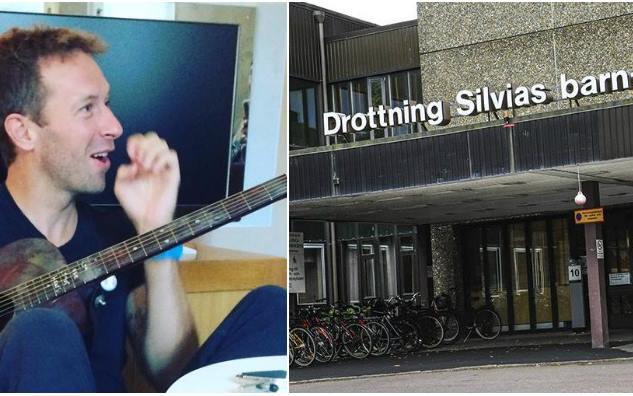 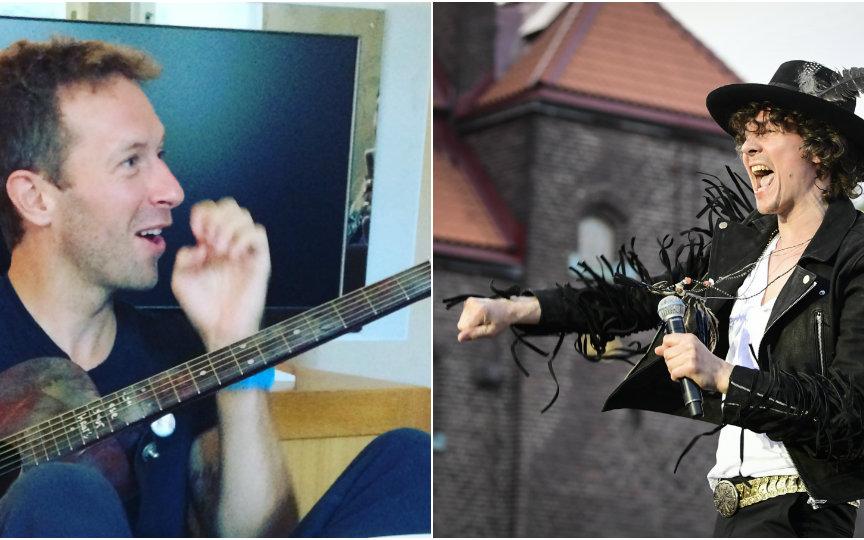 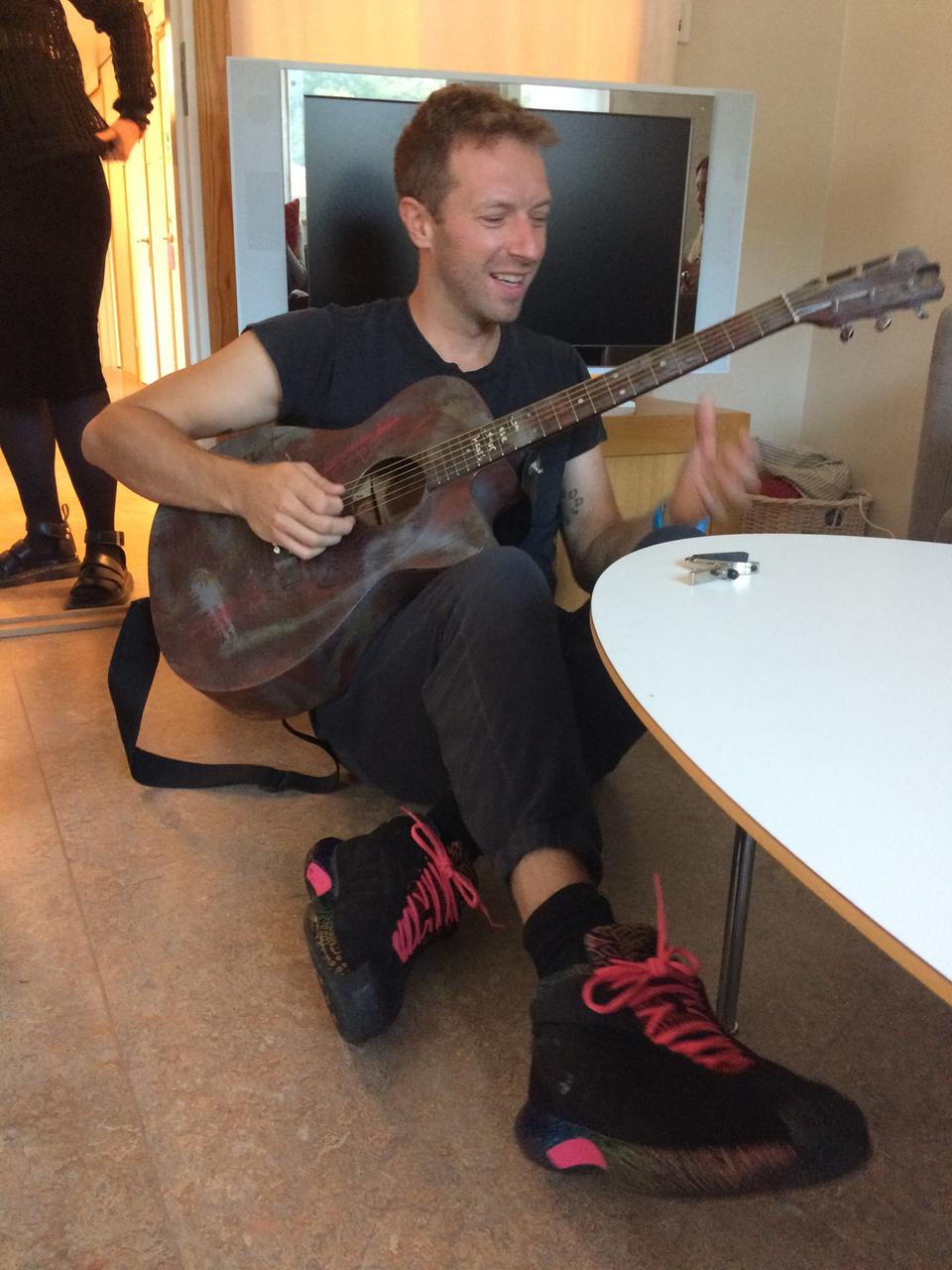 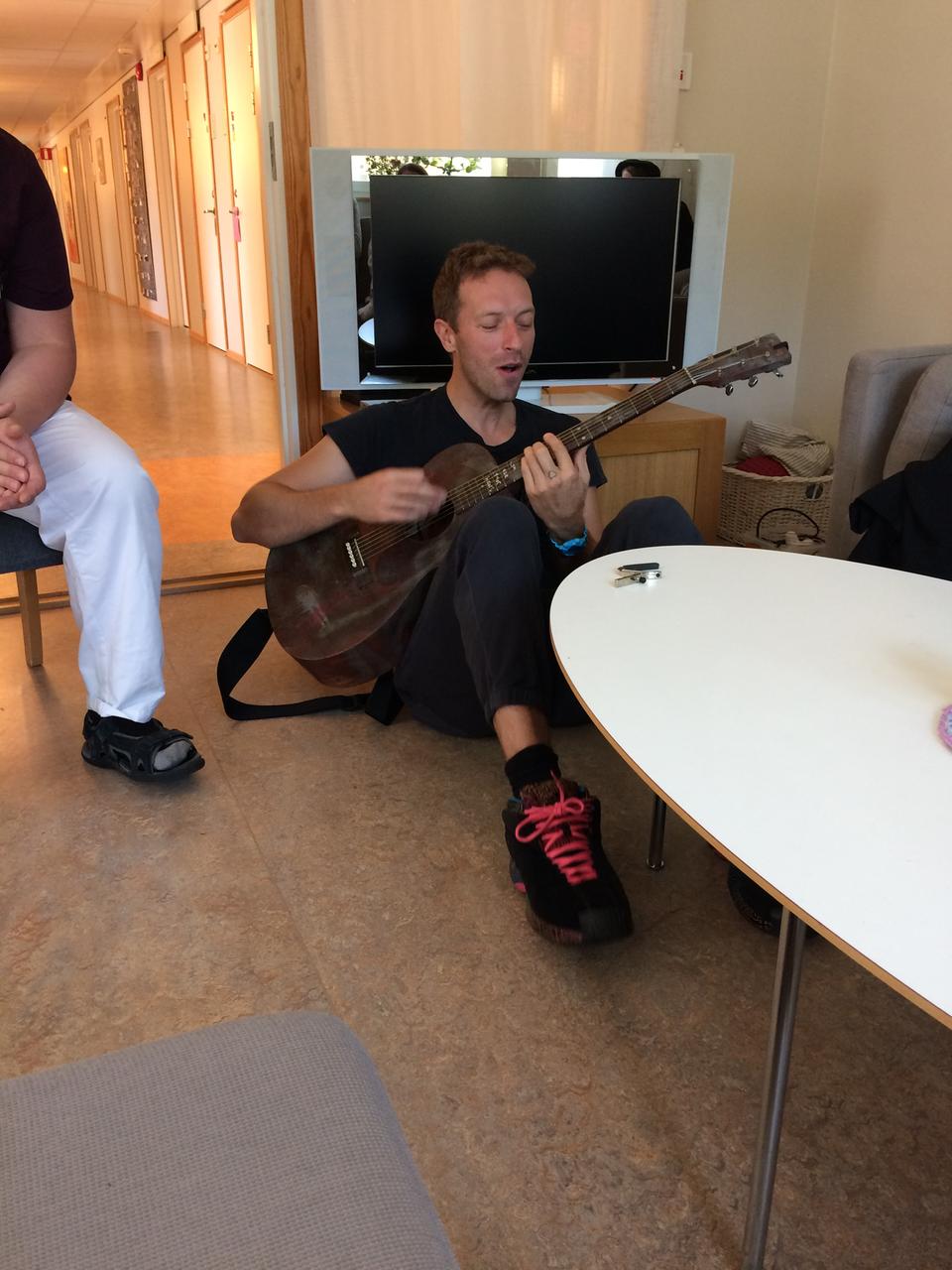 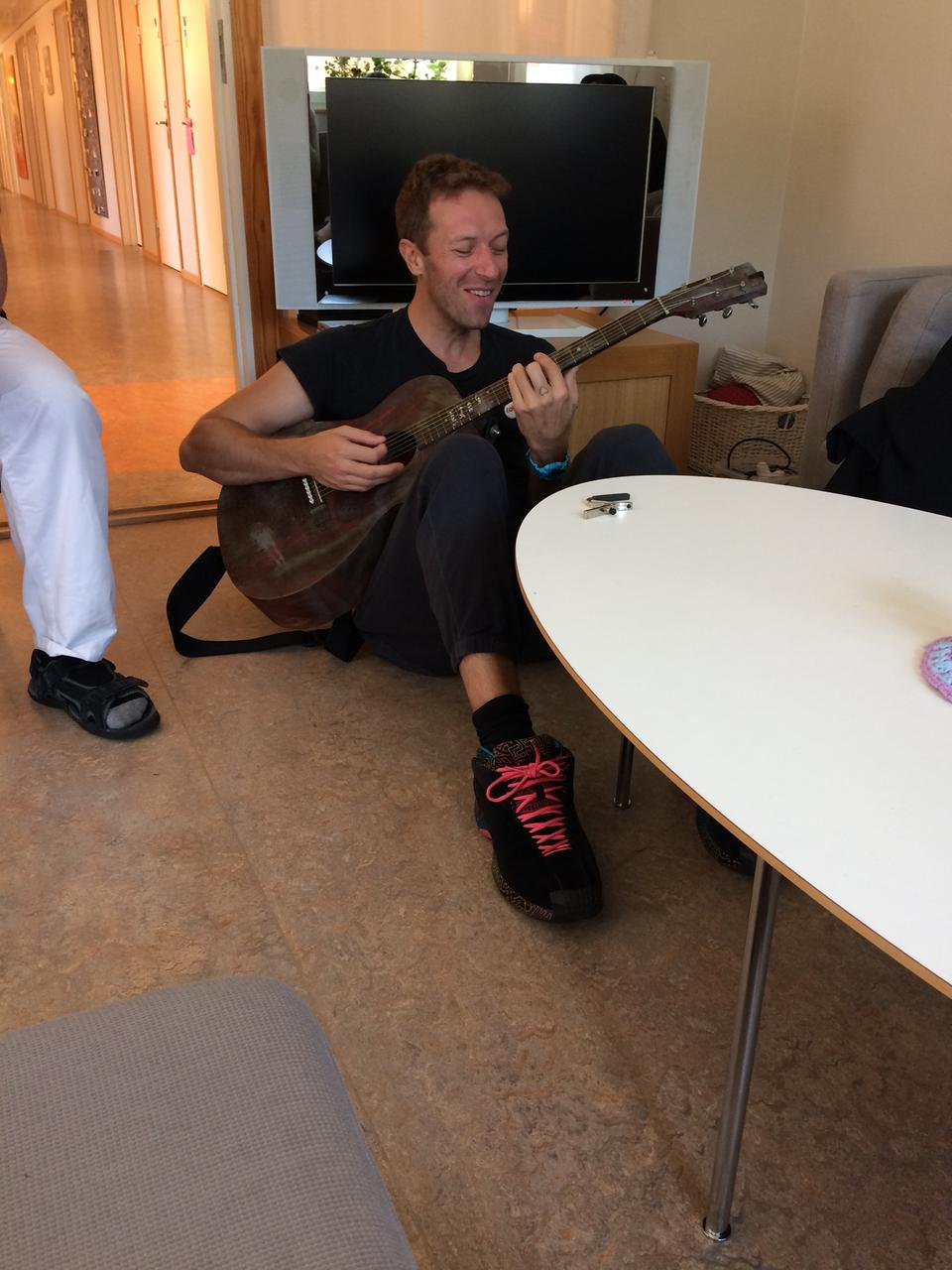 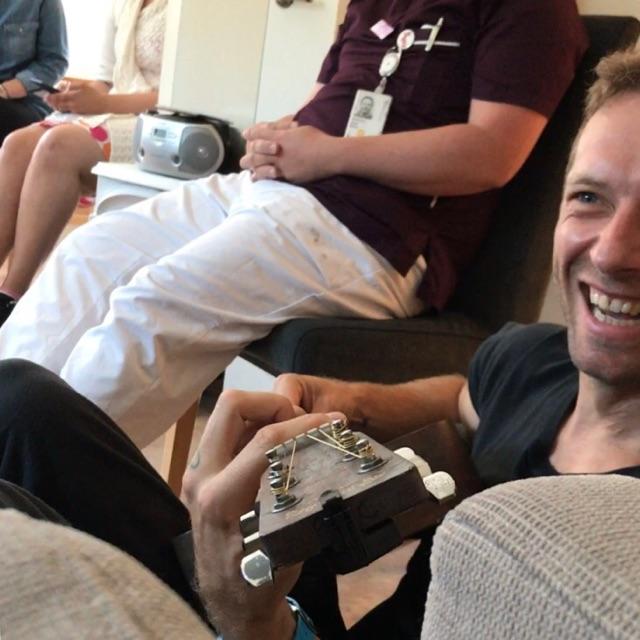 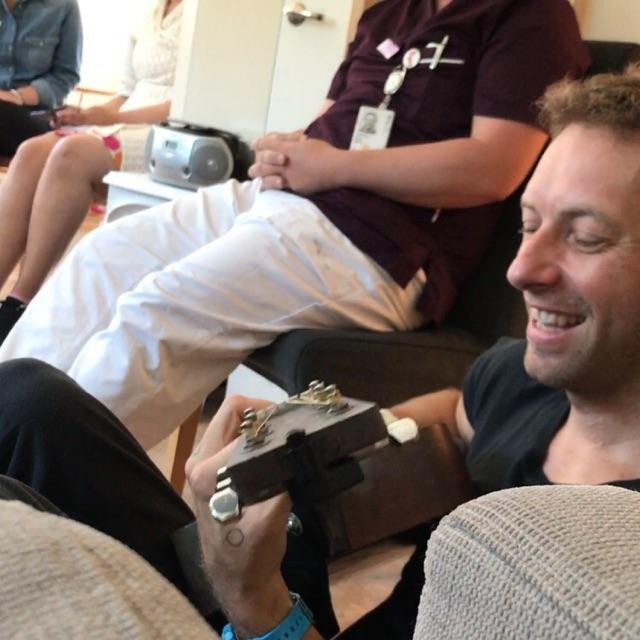 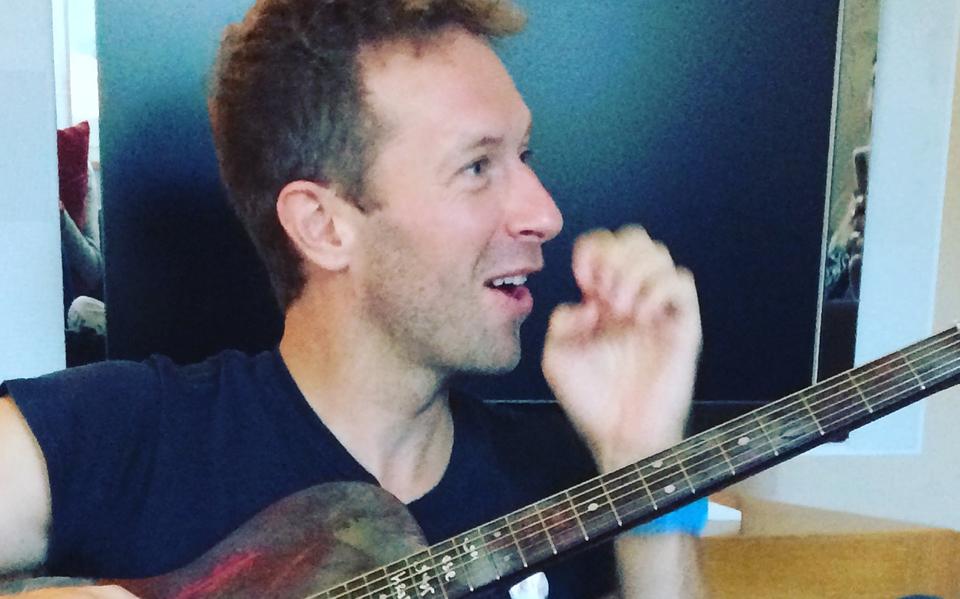 NöjeThe youths at the Children's hospital in Gothenburg couldn't believe their eyes. He entered the room, carrying a guitar. Chris Martin. They taught him to sing a song by Håkan Hellström. The rest is Ullevi history.
Johanna Hagström
Jennifer Last
Uppdaterad för 5 år sedan 14:13 - 27 jun, 2017

The eight youths in the department for anorexia and bulimia at Queen Silivia's children hospital were expecting a visit this Monday. And so they gathered in the dayroom.

– We were told that there would be some sort of activity in the afternoon, and it was supposed to be related to music somehow, says Lina, 19 years old.

She prefers to stay anonymous, but tells us that she has been hospitalized for 1.5 weeks, while several of the others in the department have been treated for months.

"Many of us were disappointed"

Anorexia is a serious disease to struggle with, thus they can’t leave the department whenever they want.

– Many of us were disappointed that we couldn't go to Ullevi to see Coldplay. I like Coldplay a lot, says Lina.

Imagine their amazement when the expected guest appeard to be Coldplay's singer Chris Martin.

– We just started laughing and couldn't believe it was true! He just walked in as if it was the most natural thing in the world. He greeted everyone and sat down on the floor.

Martin has experienced anorexia in the family

Chris Martin told the kids that he has experienced anorexia in his family.

– He understood what we are going through. He asked us how we were doing and then he started to play a few songs, Lina says.

He started out with Something just like this, thereon a song by Ed Sheeran since one of the girls told him it was her favorite song.

– We were so nervous! And starstruck! He said he was way more nervy to play the songs just for us, than in front of the 60 000 people at Ullevi.

"You have play a Håkan Hellström song"

Chris Martin asked if they knew a Swedish song he could perform at Ullevi.

– We said that he must play a Håkan Hellström song. He's one of Sweden's most ultimate singers and he's from Gothenburg. And Känn ingen sorg för mig Göteborg is the most obvious one.

"What a beautiful text!"

Said and done. They played the song for Chris Martin and he started to play the guitar and tried to sing along.

– We tried to translate some of the lyrics for him. He thought it was beautiful. "If heaven exists, I'm lost."

He told one of his crew members to write it down so that he could practice.

The rest is Ullevi history. The videos of Chris Martin singing Håkan Hellström along with the audience are going viral.

– We watched the video earlier today and it was awesome. It felt like a tribute to Gothenburg. It wasn't something he did for his image. He was actually personally involved, says Lina.